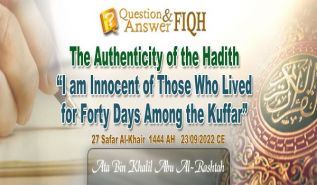 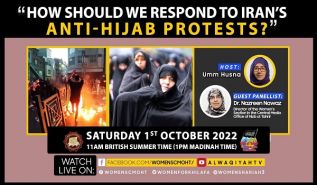 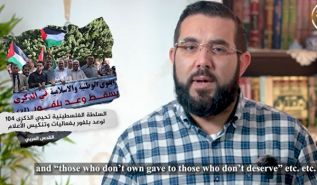 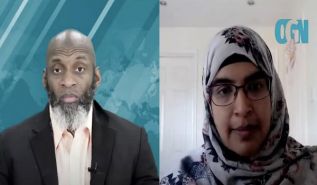 No Limit to the Zionists Inhumanity and Brutal Hatred

Since the 5th of August 2022, this past Friday, the Zionist entity has once again launched an onslaught of aerial bombardments on Gaza, killing tens, including at least 15 children, and wounding hundreds. At the same time Zionist settlers in the hundreds, protected by Occupation forces, stormed Al-Aqsa Mosque on August 7, chanting anti-Islamic songs, and insulting the Prophet Muhammad (saw).

The Zionists once again make it clear for all the world to see that there is no limit to their inhumanity and brutal hatred against the Muslims of Palestine. These child murderers feel safe in their transgressions against all that is holy, because they know that the command centers in Cairo, Amman, Ankara, Riyadh, and Tehran are in the hands of spineless traitors who do not care the least for the blood of the innocent. These servants of the West care nothing for Al-Aqsa Mosque, so long as their colonial masters are satisfied with them. In the light of the latest events, the following must remain the focus of all those wishing to support our brothers and sisters in Gaza and Palestine in general:

Account the traitorous rulers for their inaction and complicity. These rulers are the true “Israeli Defense Force”, without their protection, the Zionist entity would not remain for long. While these rulers sit idle and unmoved as the blood of Muslim children flows, they send their troops to kill Muslims in Yemen, Syria, and other countries, when it serves the interests of their Western colonial masters. These rulers have no legitimate claim to the loyalty of the Muslim masses but should rather be condemned and held accountable according to the Islamic standards.

Reject all plots to normalize with the Zionist occupation and surrender Palestine. Any negotiations aimed at normalizing with the occupation are nothing but attempts to make the Muslims legitimize “Israel” and submit to the colonialist plan to carve out Palestine from the heart of the Muslim lands. In recent years we have witnessed renewed efforts for normalization by several of the traitorous Arab nation-states. While the Muslim Ummah has at large rejected these efforts, some “shuyukh” and others claiming to be “du’at” have taken part in these normalization efforts. Such behavior must be called out as the treachery it is. We cannot succumb to pressures or honey-coated lies but must stand firm on our Islamic convictions which forbid giving up a single inch of Muslim land, in the blessed land of Palestine or elsewhere. A Palestinian nation-state based on pre- or post-1967 borders would be a recognition and legitimization of the occupation of Muslim land.

Reject Western intervention, whether it be the major colonialist states, especially USA, which has once again declared its unconditional support for the Zionist occupation of Palestine and the unspeakable crimes against its people, or the so-called “international community” with its organizations, such as the UN, which was the very institution through which “Israel” was established in the first place. The Western solutions to the problems of the Muslim Ummah, including the issue of Palestine, aim only to preserve the fragile status quo and keep the Muslim Ummah in a state of weakness and servitude to the West. In essence the Zionist occupation of Palestine is nothing more than an advanced front in the Western colonialist war against the Muslim Ummah. Any Western intervention is thus rejected, from an Islamic perspective, and all experience underscores the fact that Western intervention in the Muslim Lands only leads to further bloodshed and humiliation, so long as the Ummah refuses to bow down to the West instead of Allah.

Call on the Muslim armies to mobilize. No amount of lobbying, demonstrating, or boycotting will in itself end the bloody occupation. Although these actions are undertaken with pure intentions by many Muslims, the fact of the matter is that a military solution is necessary to solve the issue of military occupation. To distance the Muslim armies from their Ummah and their obligation, we often hear critics ask why Muslim individuals with no training, weapons, physical power or capability, do not go and fight the occupation in Palestine and elsewhere. Meanwhile the armies sit idle in their barracks, when they are in fact the very forces of this Ummah which have the practical capability of removing the occupation. Through the Sunnah of our beloved Prophet (saw), we learn that when a Muslim finds himself unable to change an evil with his own hands, he must call with his tongue upon those who are capable. In these days of the month of Muharram, where we fast on Ashura and give thanks to Allah in remembrance of Musa’s (as) victory over Fir’awn, we should not lose hope in Allah’s victory or our own Ummah but rather have full confidence in the promise of Allah and a near victory, from which the enemies of Islam will find no escape!

Establish Khilafah, liberate Palestine and all other occupied Muslim lands. No other political entity than the Khilafah Rashida will liberate the Muslim lands from the enemies, unite us after our division, strengthen us after our weakness, rule by the mercy and justice of Islam and spread its light to the world after it was enveloped in the darkness of capitalism and colonialist exploitation. Aid the global call for its re-establishment while seeking the pleasure of Allah, and your work will bear blessed fruit in this life and the Hereafter.

More in this category: « EU Tries to Save 'Nuclear Deal' with Iran Deputy Commander of the Taliban Corps Threatened to Take over Tajikistan »