O People of Yemen: This is the Month of Rajab in which Islam Entered your Country So Rise and Work to Restore it in the Reality of your Lives

A continuation of the public events held by Hizb ut Tahrir / Wilayah Sudan in the different regions and provinces of the country to create an informed public opinion of the provisions of Islam and its solutions related to the different systems of life, which dealt with the fighting and tribal conflict taking place in the various parts of the country...

The Shabab of Hizb ut Tahrir / Wilayah Sudan held three lectures in the city of Gedaref. One of the lectures was entitled, "If You Dispute about a Matter refer it to Allah (swt) and The Prophet (saw)." The speaker showed how establishing the Khilafah State upon the Method of the Prophethood will resolve the problems as well as care for people’s affairs in Islam, so that they will be happy in this world and the Hereafter.

The Shabab of Hizb ut Tahrir / Wilayah Sudan held a political address in the locality of Khartoum on October 26, 2022, which the party's publications were presented.

“Tribal strife (fitna) is a fire under the ashes, who will extinguish it?” under this title, the Shabab of Hizb ut Tahrir / Wilayah of Sudan in universities held a corner for dialogue and discussion at Al-Neelain University / College of Commerce, on October 29, 2022. Ust. Al-Fateh Abdullah spoke about the reality of the Tribal fighting  renewed in the country and most recently in the state of the Blue Nile. And he indicated that one of the reasons for this conflict was the Hawakir system, which was created by colonialism to help it manage the country and later be a spark for tribalism.

In the midst of lively interaction, the Shabab of Hizb ut Tahrir / Wilayah Sudan held a talk in the universities on Monday, October 31, 2022, in the district of Musab bin Omair in Kalakla, east of southern Khartoum. The first talk was presented by Ust.Ibrahim Musharraf after the Maghrib prayer and it was titled: “Democracy is an idea that contradicts Islam”, where he explained that Islam is an integrated way of life, and sovereignty must be for Allah alone, and governance belongs to Him as Muslims. As for the second talk, it was presented by Ust. Al-Fateh Abdullah, after the Isha prayer, under the title: "Renewed Tribal Fighting...Causes and Treatment", in which he explained the sanctity of fighting on the basis of tribalism, citing Islamic texts.

“Western interventions are a violation of the country’s sovereignty and submission from the country’s rulers” under this title, the Shabab of Hizb ut Tahrir / Wilayah Sudan in the northern district of Omdurman held a political address in the popular market in Omdurman, in which Ust. Al-Radi Muhammad spoke, where he explained the reality of the intervention of envoys of Western countries, whether they were ambassadors or envoys It is an intervention related to taking care of the country's affairs, whether it is related to the economic, military, tribal conflict, or political matters such as the Juba Agreement.

Hizb ut Tahrir / Wilayah of Sudan also held its regular forum in Al-Obeid on Saturday, November 12, 2022, under the title: “Tribal Fighting is a Fire Under the Ashes, Who Extinguishes It?” Ust. Muhyiddin Hassan talked about the reasons that led to tribal fighting. They are the friction between farmers and shepherds to obtain fertile lands or pastures, the Hawakeer system that the colonizer brought, the interests in the land of gold and oil, and the political tensions in which the tribe is exploited to achieve cheap political ambitions.

The Shabab of Hizb ut Tahrir / Wilayah Sudan in universities set up a corner for dialogue and discussion at Al-Neelain University - Faculty of Commerce; on November 12, 2022  titled: "The Caliphate is the guarantee of change and the uprooting of the Kufr influence." The first speaker, Eng. Awab Yasser, began his speech by stating the bitter reality that people live in Sudan, and the real danger the country is going through that warns of divisions and fragmentation of the country. The speaker stressed that the political settlement that is taking place now on the basis of the (alleged) constitution of the Bar Association is nothing but a war against the principles and values of this Islamic nation, and made it clear that the real change is based on Islam. And that is by pledging allegiance to a man who governs them by the Book of Allah and the Sunnah of His Messenger (saw), the caliph of the Muslims.

“The Implementation of the Unity of the Islamic Ummah”, under this title the Shabab of Hizb ut Tahrir / Wilayah of Sudan in Omdurman West locality held a political address in the Libyan market on November 16, 2022, in which Professor Babiker Al Mahdi explained the jurisprudence of the unity of the Ummah and its absence from the life of the Islamic Ummah; political, economic and social, and that this jurisprudence is ordered by Islam. The enemy knew that the secret of the strength of the Islamic Ummah is in its unity, so it deliberately plotted and deceived, and then came up with an idea of nationalism between the Turks and the Arabs, followed by the idea of patriotism, tribalism and regionalism.

"Western interventions in Muslim countries...Sudan as Model", under this title the Shabab of Hizb ut Tahrir / Wilayah Sudan held a political address in the city of Gedaref on November 17, 2022, in which Mr. Muhammad Al-Hassan Ahmed, a member of the Wilayah Council, spoke about the emergency situation that the Islamic Ummah is going through the rule of the Kufrl West in the smallest details of its life through agent rulers who sold their religion with an offer from the world, they accepted humiliation and subordination, so they shackled a nation that yearns for victory and leadership. Where he referred to Western interventions through laws and legislation to impose their view of life on a nation for which Allah imposed a distinctive style of life that is the best ever.

“The Rightly Guided Caliphate is a promise and good tidings that the leaders of the West are terrified of," under this title, the Shabab of Hizb ut Tahrir / Wilayah Sudan in universities held a lecture at the Dakhiliya Al-Wasat Mosque at the University of Khartoum on November 20, 2022. A general leadership for Muslims to implement Allah’s law and that it is an obligation from Allah and a promise from Him.

At the end of the lecture, the speaker explained to the students the necessity of working with the workers to establish the Khilafah Rashidah, as it is an obligation and a promise. The interaction of the students was excellent, as they participated in the questions, interventions, and inquiries that the lecturer Sheikh answered in an impressive way that impressed the audience. 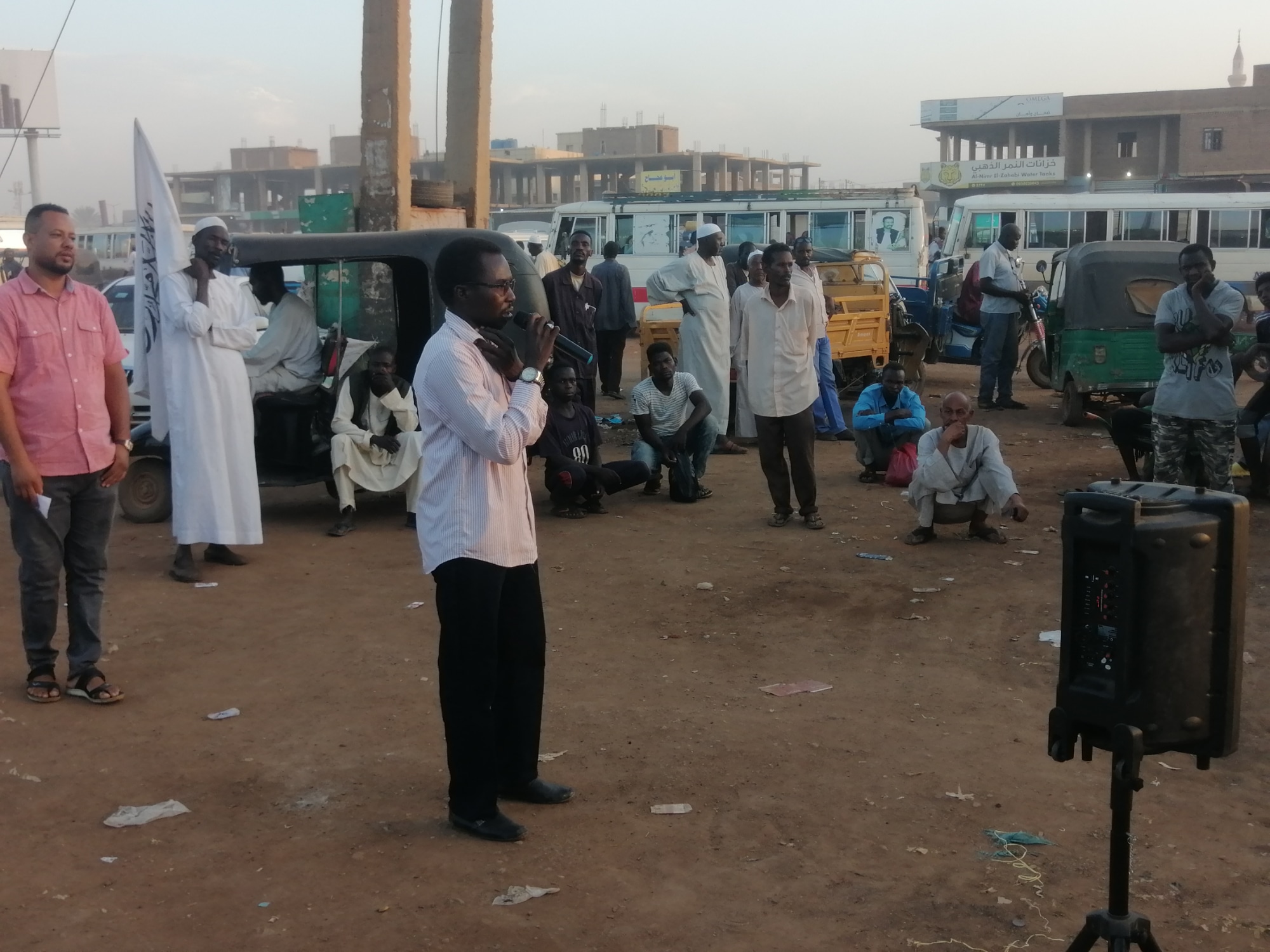 View the embedded image gallery online at:
https://www.hizb-uttahrir.info/en/index.php/dawah/sudan/23880.html#sigProIde7bf0a25df
More in this category: « Wilayah Sudan Press Report Press Report 25/10/2022 Wilayah Sudan Political Symposium in Omdurman The Framework Agreement and the Challenge of the Khilafah »

The Jewish Entity’s Crime in Jenin for…